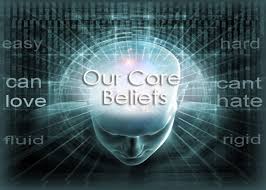 If someone asked you how you know something, what would you answer?  I learned it at school.  My parents taught me.  I checked on Google.

When we’re talking about facts or skills, it’s often easy to remember how or when the information came to us.  However, if I asked you about a personality trait or ability, such as if you are kind or able to keep a secret, your response may be, “I’m not sure, I just know (whether I am or not).”

Depending on the question, you may feel embarrassed or proud. Either way, there is an emotional charge that is a result of how you feel or what you believe about yourself, in the context of the trait or ability.  In other words, my question would have come upon one of your core beliefs.

What Are Core Beliefs?

Core beliefs are the very essence of how we see ourselves, other people, the world, as well as the future.  Our core beliefs then inform how we operate in the world.  Below is a list of common negative core beliefs.

While it’s painful to think these things about ourselves, the pain is increased when these belief systems are used to navigate our way in the world.  When we incorporate negative core beliefs into our psyche, they become self-fulfilling.  We think we’re a failure, so we don’t try new things, which seems to prove that we’re a failure…and the cycle continues.

Where Do Core Beliefs Come From?  An example.

A kindergarten class is preparing for the end-of-year concert.  Everyone is working very hard to get the song right and the teacher keeps moving individual children around to maximize the quality of the sound.

In the back row stands a boy named Jeremy.  Jeremy loves to sing and has been practicing the words every day as he walks home from school.  Jeremy sings with enthusiasm and his teacher has moved him a few times in order to find the appropriate place for his ‘sound’. Finally, in exasperation, the teacher suggests that Jeremy not sing, but whisper the words, in order to fit in with the group.  While Jeremy doesn’t completely understand what just happened, part of him sees that his way of singing doesn’t fit.  Maybe he doesn’t fit? Maybe there’s something wrong with him?  Jeremy grows up, never to sing again, and becomes hyper-aware of being ‘too much’ when out in the world.

Often a key part of therapy is discovering our core beliefs (both negative and positive) and then exploring their history and validity.  One way to do this is through life review therapy.

Life Review Therapy involves looking at our past from the perspective of today.  The goal is to help the individual, couple or family to find meaning and resolution regarding a painful incident and be able to move on with greater awareness and sense of calm.  Often the painful incident involves the creation of a negative core belief.

Our young singer, Jeremy, is now 35 years old and has decided to see a therapist to deal with long-term social anxiety that has affected his life on many levels. He made his education and career choices (accounting) to fit in with his fear of interacting with groups of people.  He choose a smaller post-secondary school and a program that would allow him to work somewhat alone.

Jeremy accepted a junior management position three years ago, and discovered that he is good at it.  Due to his management skills, he was recently offered a promotion that will involve speaking in front of groups of people to present financial information. On one hand, Jeremy wants the promotion–he’s become bored with his current position and would like the extra income.  On the other hand, he is terrified at the thought of presenting and ‘making a fool of himself’ in front of his colleagues.

With his therapist, Jeremy explores the history of his social anxiety. He talks about the thoughts that are linked to his feelings when having to interact with groups of people. They treat the process like a science experiment–looking for similarities in thought content and events. Jeremy reports that he’s afraid of being ‘out there’.  He remembers that people are often telling him to “speak up” as they can’t hear what he has to say.  This direction increases his anxiety as he swings between wanting to be heard and ‘being out there’.

During therapy, Jeremy remembers his kindergarten experience and is able to begin to unravel his current feelings and how this core belief has affected his life.  Is this belief accurate? He was also able to process the anger that he feels on behalf of his young self towards his teacher and her actions.

Jeremy did accept his promotion and learned skills to cope with his social anxiety.  A big piece of his ability to move forward was that he was able to question the negative core belief that was holding him back.

This is a very strait forward example and determining our core beliefs are not often this direct.

I invite you to think about your core beliefs.  What are they?  Do you know?  How many of them are positive?  Are they helping you to go the places in your life that you want to go, or are they preventing you from living your best life?